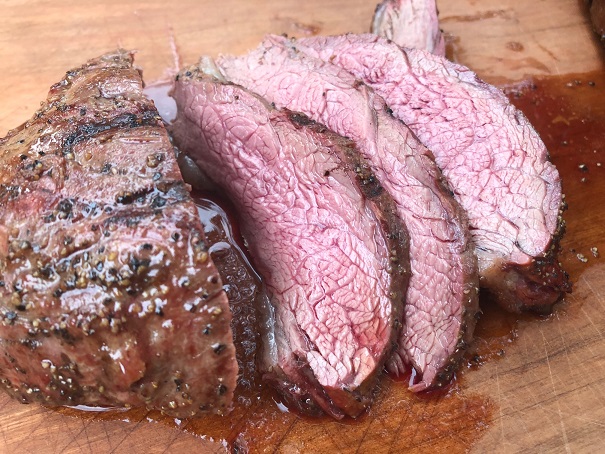 Beef picanha (or codon or the tip of sirloin) is a typical cut of Brazilian cuisine which you can find in any Brazilian churrascheria or restaurant, served with swordfish after being cooked on a rotisserie together with sausages, ribs, pineapples, etc.

The piece is spreading very quickly in other parts of the world like Europe and North America because of its taste and quality. It’s not as widespread yet, though. If you have a trusted butcher, try asking him – he will be able to help you the best.

Picanha cut is famous for its outer layer of fat. The thicker this is, the more desirable the piece is. The Picanha Cut of silverside is the tip of sirloin, it’s triangular and the weight varies between two and three pounds (1 kg and 1.5 kg).

The rest is a fairly lean piece of meat (which ladies find satisfying). The lean part is however enriched by the fat which, turning and melting on the rotisserie or the grill, penetrates the fibers and the lean part, giving it a spectacular taste.

We also recommend trying the horse version, with a very rich and original taste.

Turn on the BBQ and set it up for indirect/direct cooking, to prepare for the two roasting methods for Beef picanha

Once the barbecue is ready we are ready for grilling.

First, we have to “trim” our beautiful picanha piece, then armed with a nice sharp knife we clean the part opposite from the layer of fat from the silver skin.

Then cut it into slices of about two inches (5 cm) thick following the direction of the fiber. In this way, we will then scallop them against the fiber at the end of cooking.

At this point, we are ready to grill them on direct cooking to create a nice crust and melt the fat well. Brown it nicely, paying attention to the inevitable flare-ups due to the dripping fat until it reaches the internal 120° F (48° C).

If you like it more done, make the indirect phase longer and brown it until the desired temperature.

We scallop the steaks against fiber and sprinkle them with good salt flakes.

Roasting PIcanha in the oven

If you can’t make yourself a Picanha bbq you can prepare the Picanha meat in the oven.

Let the piece cook up to a temperature of 95-105°F (35-40 °C) and then finish it in the pan by giving it a quick sear to the lean part and then put the fatty part in contact with the cooking surface until it becomes crunchy, approximately up to a core temperature of 120° F (50° C)

Different types of jobs available for the graduates