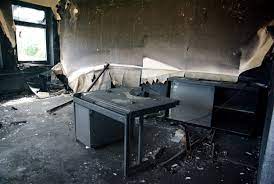 There is a long list of reasons which can be responsible for a building’s loss of structural integrity. This list would have to include everything from poor construction to the usage of cheap materials, age, and even negligence on the owner’s part. If you were not the contractor of your own office building, you may want to watch out for the common signs of structural damage.

If any portion of your office floor is sagging on any one side, it can be very dangerous in the long run. Note that it’s not the same as an uneven space on the floor because that could be indicative of poor tile laying. Although that should also be addressed, it’s not as big a risk as a sagging floor.

If a portion of your office floor is sagging, then you should be able to confirm that by following the movement of a ping pong ball. Gently lay down a ping pong ball on the suspect floor and follow its movement. If the floor is even, it will settle down and not move after a few seconds. If the floor does indeed have a dangerous incline or decline, the ball will follow it until it reaches a wall or any other obstruction.

Sagging floors are not uncommon to see on multistoried, concrete structures, and it will need a professional inspection from a Commercial Concrete Services provider to determine the causes(s). You should call for checks and repairs as soon as possible though, because sagging, declined/inclined floors may indicate severe water damage to the foundation, or imbalances in the foundation’s structure itself.

Windows and Doors Get Stuck Often

Unfortunately, it can also be indicative of foundational water damage, shifts in the building’s foundation, and sagging walls. If you can rule out the two comparatively benign causes, it is time to seek help from professionals for an inspection. Also, the floor surface may be sagging near the stuck windows and doors.

Depressed or Dimpled Walls and Ceilings

Depressed and/or dimpled walls and ceiling are classic signs of water damage. It mostly (but not always) starts with the top floor. You will need to have the walls inspected and repaired by your commercial concrete services provider. If they do not provide roofing services, the ceiling will need to be repaired by professional roofers.

Notify your employees about the points discussed here because everyone needs to be vigilant about structural damages. If any of the signs are reported between two regular inspections, it’s best to get it checked professionally, as soon as possible. Timely action can save lives and prevent huge financial losses.

Why Invest In Real Estate In Meribel?

Best Travel Packages in Singapore You Could Find